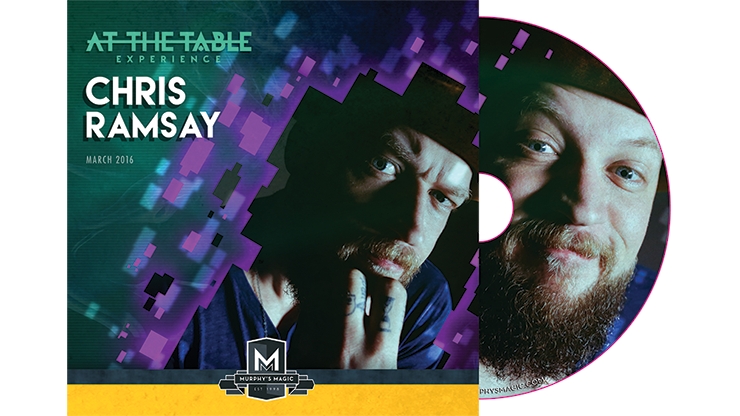 Facebook Google+
Beschreibung Bewertungen 0
Beschreibung
We're glad to welcome for the first time our very own content producer, Chris Ramsay, to an At... mehr
Menü schließen

We're glad to welcome for the first time our very own content producer, Chris Ramsay, to an At the Table Experience. Chris is best known for his appearance on Wizard Wars and through his growing social media platforms. He's a sleight-of-hand artist who brings a unique aesthetic style to his routines and his branding. Learn trade secrets! Chris looks at past releases like The Praxis Control, a card control that will fool, and Klepto, a card steal. He's also brought some never-before-seen-or published effects such as a hilarious watch-steal routine and a fantastic version of the Voodoo Card, which will leave both magicians and laymen stumped.

Iphone Opener: A hilarious way to start off any approach using Siri.

Card-to-Mouth Again: A great, streamlined version of the card-to-mouth where two selections transpose.

You Do the Voodoo: An incredibly fooling and easy version of the classic Voodoo card effect, where the spectator's signed card ends up ripped and burned on the spectator's command.

I Inked Myself: The spectator selects a card and you reach to your pocket to retrieve a sharpie. The sharpie has busted and your pocket is full of ink, but within the ink, their selection is revealed. You then magically repair both the sharpie AND the pocket.

Duck Sandwich: Another visual Sandwich trick with a kicker ending.

Spread and Butter: A prediction card effect where the method is as fun to do as it is to watch.

Klepto: An invisible one card steal.

C2P Corner tear: Tear the corner off of a single playing card and insert it into your phone's screen. The spectator takes out the imaginary corner from the phone and puts it in his pocket. When he goes to take it back out of his pocket, it's really there!