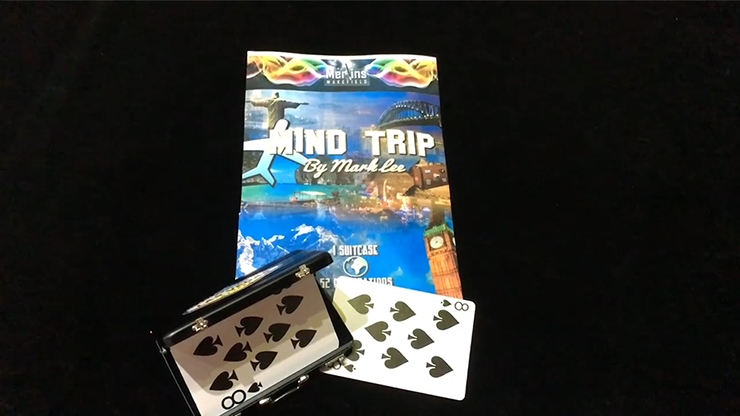 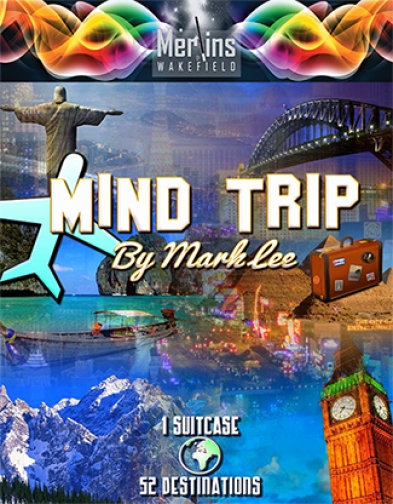 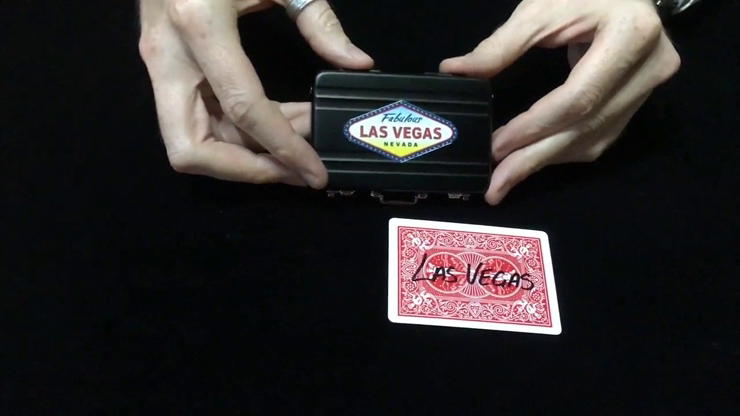 Mind Trip by Mark Lee and Merlins of Wakefield - Trick

The magician states that he has just returned from a city vacation. He introduces a small metal suit case (about the size of a deck of cards) and a deck of playing cards. He removes the cards from their box and freely shows the faces to be all different and thoroughly mixed. The deck is turned face down as the magician explains that he has written a famous city on the back of each card giving a choice of one of the fifty-two most popular cities in the world to visit. A spectator selects a face up card which is placed on view while the magician shows some of the other cards and cities that the spectator could have selected. The spectator turns their selected card over to see for the first time which city they chose, Las Vegas. The magician picks up the small suit case and turns it over to reveal a Las Vegas travel label attached to its side! Not only that, the magician explains that whilst in Vegas he picked up a souvenir from one of the casinos. He opens the small case and shows that it contains a single playing card from one of the famous casinos in Vegas, but not just any card, when the card is turned over it is discovered to be identical to the one selected by the spectator!
Evaluations 0
Read, write and discuss reviews... more
Close menu
Customer evaluation for "Mind Trip by Mark Lee and Merlins of Wakefield - Trick"
Write an evaluation
Evaluations will be activated after verification.
Customers also bought Customers also viewed
Customers also bought
Customers also viewed
Kingdom Classic (Gold) Playing Card Collection...
€84.95 *
THE FINGER BIRD by Chazpro Magic - Trick
€24.95 *
Leaves Autumn Edition Collector's Box Set...
€79.95 *
MUSIC BOX Premium (Gimmicks and Online...
€89.95 *
Pandora's Box by Marcos Cruz - Trick
€64.95 *
Mystical Smoke Box (gimmicks and online...
€174.95 *
Marchand de Trucs & Mindbox Presents The Viper...
€139.95 *
Lunch With Stars by Mr. Magic - Trick
€49.95 *
Luxury Box by Tora Magic - Trick
€184.95 *
JET-BOX (Red) by Mickael Chatelain - Trick
€34.95 *
Mystery Box by John Kennedy Magic - Trick
€69.50 *
Tiny Bird (Gimmick and Online Instructions) by...
€19.95 *
Flipover Box Ala Pickle (Standard) by Ickle...
€134.95 *
Risky Bet (EURO, Gimmick and VCD) by Henry Evans
€34.95 *
Pro Card Duck by Premium Magic - Trick
€59.95 *
Escape (Red version) by Mickael Chatelain - Trick
€44.95 *
The Clarity Box by David Regal - Trick
€79.95 *
Extractor V2 E2 (with Gimmick) by Rob Bromley...
€79.95 *
Dream Act by Shin Lim - Trick
€199.95 *
Your Favorite Card (Special Edition) by Katsuya...
€95.95 *
Viewed