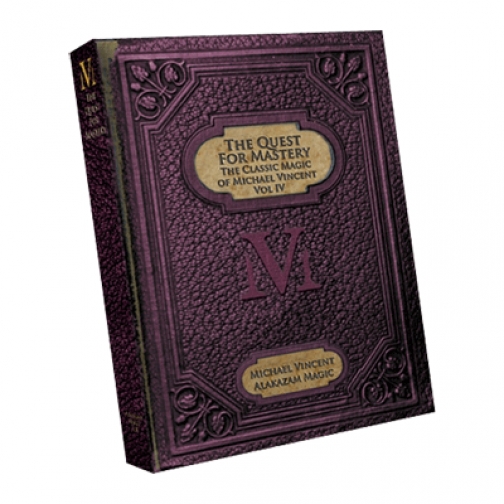 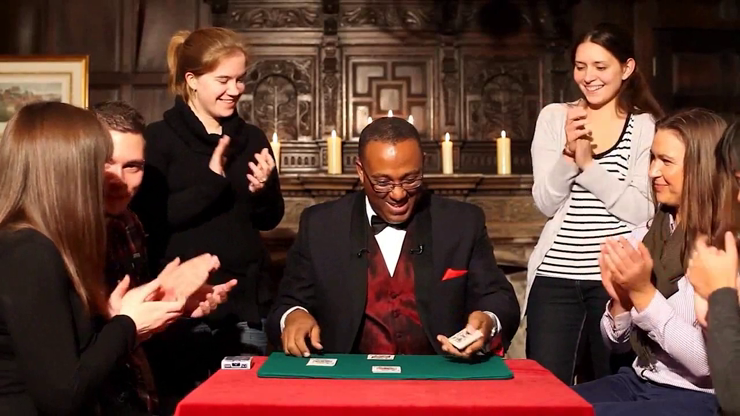 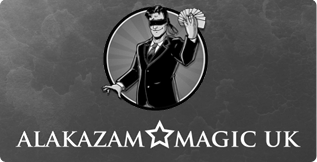 Facebook Google+
Description Evaluations 0
Description
It's finally here. The forth installment in our fantastic and enlightening voyage with Michael... more
Close menu
It's finally here. The forth installment in our fantastic and enlightening voyage with Michael Vincent. Join Michael & Chris as they guide you along your journey in the Quest For Mastery. The Classic Magic of Michael Vincent Volume 4 The Quest for Mastery Collectors Edition (Limited To 1000 Units) *The Collectors Edition comes in the same beautiful style case with sleeve as Michaels other vols in this series. When the Collectors Editions have all sold out the DVD's will be produced in a standard 4 disc DVD case. On this new 4 Disc DVD set from Alakazam Magic, Michael Vincent brings his passion for Magic and his expert showmanship to a brand new conversation. This project explores how Michael thinks about taking the classics of magic and breathing new life into them. With a set that runs for over 6 hours The Quest for Mastery is all about elimination - removing the inessentials until all that is left is an elegantly crafted mystery - this process can take years to arrive at. Inspired by the philosophy of Robert Houdin, Dr Hofzinser, Dai Vernon and Darwin Ortiz, you have an opportunity to discover 'The Vincent Touch'. This is Michael's unique perspective on classical effects and how to make them relevant for today's modern audiences. This is a master class in magical construction, design and artistic performance. Disc 1: Performances Live Show at Eastwell Manor2 Hands - Three Coins My Rope Routine - 'Humble Beginnings' * In Memory of Hofzinser Stand-up Triumph Stand-Up Twisting The Aces An Ace Problem aka 'Grown Up Hofzinser' Card at a Number Remember and Forget * Disc Two: Performances Prologue: The Secrets of Conjuring and Magic The Legendary Conus Aces Explanations: Vincent on Conus - Complete Explanation with a mention of 'The One Shuffle Finale'. The McDonald Aces with 'The Vincent Switch' *Disc Three: Performances & Explanations Close-up Card Magic: Set One Look an Illusion. The Vincent Revelation with thanks to Larry Jennings - The Interlaced Vanish meets The Jennings Revelation. The Invisible Palm - A re-examination. Close-up Card Magic: Set Two The Swing Beat Aces. The Vincent Combination with thanks to Darwin Ortiz. Cy Endfield's 'Gambler Out-Gambled'. *Disc Four: Bonus Goodies Conversation with Chris Harding - Life after the first 3 Volumes with updates and revisions: Kismet Updated. Vincent's Aces Version II. 4Play with Foursome 'The Out'. Pandora's Paradox-Additional Finesse. The Vincent Set-up for The Zarrow Shuffle. Bonus Performances: My Favorite The Devilish Miracle - Tribute to Marlo (Performance only). The Progressive Revelation & Explanation.
Evaluations 0
Read, write and discuss reviews... more
Close menu
Customer evaluation for "The Quest for Mastery (Limited Edition) by Michael Vincent and Alakazam Magic - DVD"
Write an evaluation
Evaluations will be activated after verification.
Customers also bought Customers also viewed
Customers also bought
Customers also viewed
Volition blue chip by Joel Dickinson - Trick
€39.95 *
More Diverse Deceptions by Richard Osterlind -...
€39.95 *
HAPPY BIRTHDAY TORN AND RESTORED (German) 25...
€11.95 *
Replica Deluxe Ramsay Set Walking Liberty...
€194.95 *
Hint!
PRESTIGE 2.0 (No Elastics) by Sergey Koller &...
€149.95 *
NEW IMPROVED MASTERS OF MAGIC SET by Fantasma...
€49.95 *
Flamano by Cigmamagic - Trick
€99.95 *
Ultimate Magic Teapot SILVER by 7 MAGIC - Trick
€149.95 *
Lynx Smoke by Lynx Magic
€349.95 *
Chop Glass (Gimmicks and Online Instructions)...
€49.61 *
Viewed
Trusted Shops Reviews Toolkit: 1.1.7