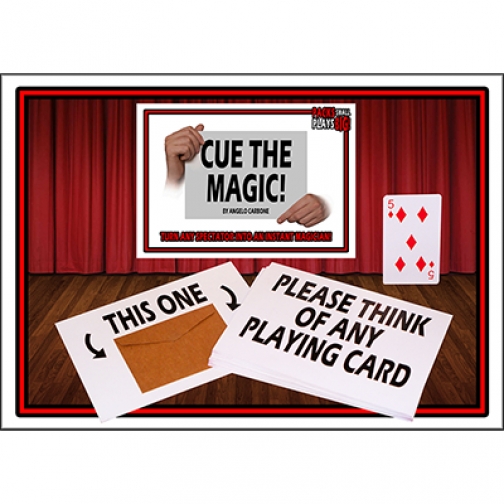 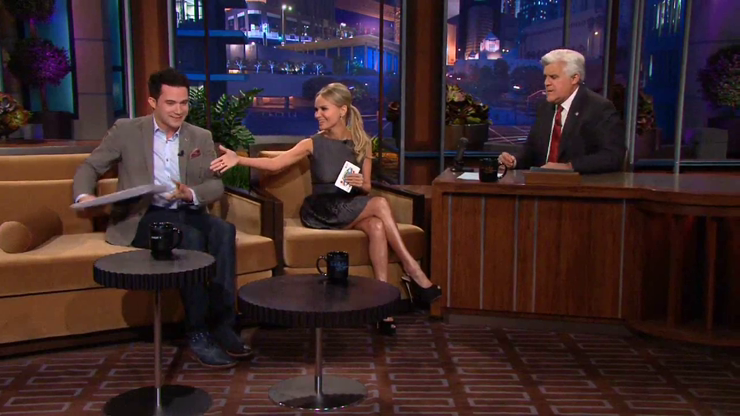 Facebook Google+
Description Evaluations 0
Description
Cue The Magic by Angelo Carbone is a laughter packed routine that makes a spectator an... more
Close menu
Cue The Magic by Angelo Carbone is a laughter packed routine that makes a spectator an instant magician. Not only are laughs guaranteed, but the magic is super strong too! Here is the effect...You ask your audience who would like to become a magician and perform their very own trick. A volunteer joins you on stage and you ask them to read out the script on the cue cards you are holding. During the routine, a second volunteer comes up on stage who freely names ANY playing card. Eventually when the last cue card comes into view an envelope is seen which contains the freely thought of playing card. Wow!Cue The Magic packs flat and plays BIG! It is great trick to get a CEO or birthday child on stage and make them the star of the show. You just sit at the side with your cue cards and they do all the performing for you. There is absolutely no force of playing card. Any card can be freely named and it will be in the envelope. Powerful stuff! Easy to do yet strong in effect. As seen on The Tonight Show with Jay Leno.Complete with custom jumbo playing cards, carry case, interchangeable cue cards, comedy lines and four routines suitable for adults or kids. So let the magic begin... three, two, one and Cue the Magic! "Angelo Carbone is one of the most clever and creative minds in magic. Cue the Magic is Angelo at his best and should be in the repertoire of every standup performer." - Richard Kaufman "Yet again Angelo has come up with an idea that is so brilliant and combined it with a method that is devilishly simple. Just wonderful!" - Andy Nyman "Love this routine. It's as fooling as it is funny." - Justin Willman "Stage routines as interactive and entertaining as Cue the Magic are very rare. I love performing it and you will too!" - Jon Allen "Cue the Magic is not a trick, it's an ingenious routine." - Asi Wind
Evaluations 0
Read, write and discuss reviews... more
Close menu
Customer evaluation for "Cue the Magic by Angelo Carbone - Trick"
Write an evaluation
Evaluations will be activated after verification.
Customers also bought Customers also viewed
Customers also bought
Customers also viewed
A.B.See (Gimmick and Online Instructions) by...
€34.95 *
Humbug (Blue Card with DVD) by Angleo Carbone -...
€34.95 *
NEW
Electronic Voodoo Corkboard Magic by Hatiro
€189.95 *
8 Deck Wooden Storage Box by TCC
€39.95 * €64.95 *
HEADS UP 2 by Wayne Dobson and Alan Wong - Trick
€29.95 *
Quantum Deck (Gimmicks and Online Instructions)...
€39.95 *
Perception Shaped as a Coin by Miguel Angel Gea...
€34.95 *
Intuition by Mozique, Alakazam Magic and João...
€198.95 *
Press Button By Ebbytones video DOWNLOAD
€8.00 *
Vanishing Glass of Milk PRO (Gimmicks and Stand...
€98.95 *
Dream Prediction Lite (Book, DVD, Props) by...
€199.95 *
Hover (with DVD) by Angelo Carbone - Trick
€29.99 *
Psychic Card Stand - Trick
€74.95 *
100th Monkey Multi-Language(2 DVD Set with...
€79.95 *
The Gift Black (Gimmick and Online...
€74.95 *
A New Angle by Ryan Plunkett & Michael Feldman...
€49.95 *
Viewed
Trusted Shops Reviews Toolkit: 1.1.7